Open educational resources are materials used to support education that may be freely accessed, reused, modified and shared by anyone. 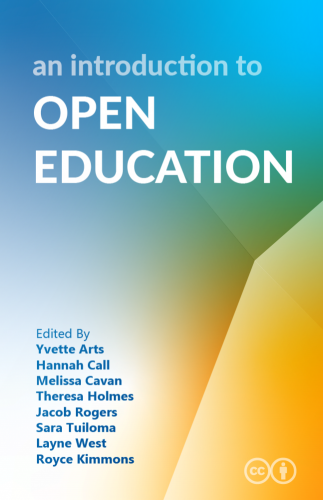 CC BY Some rights reserved by EdTech Books

This is simple, accurate, and effective. I'm not sure I'd really support the idea of an "official" definition, but when I have reason to describe succinctly what OER means, I'd personally be happy to use this version.

I don't support the idea of an 'official' definition either. I was moved to offer this by Chris Pegler's post that suggested a short succinct account of OERs would be needed for pragmatic purposes, such as introducing the concept quickly to people unfamiliar with them.

The statement takes the classic three-part form of definition:

This definition avoids needless redundancies. Specifically, it avoids phrases like "digital or non-digital' which, on examination, mean the same as "everything". It also avoids formulations like "OERs are resources that..." because this has the form "resources are resources", which is not helpful.

The Nature of the Larger Class of Entities

The nature of the larger class of entities is described functionally, rather than essentially. By that, what I mean is that I have taken a term (materials) that is vague about the nature of the entity, and specified it according to how the entity is *used*, or in other words, by the 'function' to which the entity is put.

Why do we prefer to define the larger class of entities functionally? Because the idea of a definition is to capture what won't change about the entity. File formats change, media change. What doesn't change is what we want to be able to do with the entities, which in this case is to use them to support education.

(There was a whole debate in the late 90s and early 00s about 'what is a learning object' that dragged on needlessly because people tried to define the *kind* of object (reusable, discoverable, digital, object-oriented, whatever) rather than how the object was used. So my thinking here is, let's avoid that.

(Pragmatism does not mesh well with essentialism.)

Why did I use the word 'education' rather than 'learning'. Because I wanted to capture not only the activities of those people who are engaged in learning, but also those people who intend to support learning - in other words, those who intend to educate. By using 'education' therefore I am referring (roughly) to both teachers and students, where by using 'learning' I would be referring only to students.

The Statement of How They Are Distinct

The statement of how they are distinct is stated as a modality, rather than essentially. That is, it describes what people may do with the entities. So again we are not trying to describe the nature of the objects - we don't care - but rather, what functions the objects support (as some might say, what are the 'affordances' of the objects).

Why do we prefer to describe how they are distinct as a modality? For the same reason as above, we want to is to capture what won't change about the entity. Media change, markets change, institutions change. What doesn't change is what we want to be able to do with the entities, which in this case is to access them, reuse them, modify them and share them.

The statement has two distinct parts:

Though typically omitted from accounts of OERs, the reference to 'anybody' is important. I want to be clear in this definition that we are referring not only to education providers, not only to teachers, not only to enrolled students, but to *anybody*, the entire population of humans. To me, this is the key part of the objective of the OER movement, the key point where it becomes more than just a technical discipline and embraces some sort of wider vision or idealism. It's the reason I support OERs.

Access - is most frequently left off the definition of OERs, and yet is the most important. Nothing else follows if you cannot access the resource, that is to say, obtain the resource (or a copy of the resource) for oneself. Fundamental to a resource being open, in my mind, is the ability of anyone to access it. This is what allows us to say that things like YouTube videos are at least *partially* open - whatever else their flaws, at least we can access them.

Use - is most frequently stated. I've chosen a deliberately vague verb here, because use varies depending on the resource. To use software, for example, we 'run' software, which is the first of Stallman's four freedoms. Or we may use a resource by reading it, studying it, watching it, playing it, whatever. Wiley's definition demands the freedom to 'reuse', which is a narrower definition of 'use'.

Modify - is explicit in all definitions. Wiley describes it in two ways, to "revise" and "remix". Stallman refers only to the ability to "modify" a resource. Creative Commons has a "derivatives" clause but is otherwise silent on modification.

Share - is again explicit in all definitions. Wiley describes the freedom "to share copies of the original content, your revisions, or your remixes with others." Stallman describes the rights to "redistribute copies" and "distribute copies of your modified versions". Creative Commons addresses sharing under the 'share alike' clause, which mixes two separate concepts. Since here we are merely defining OERs, and not creating licenses, we can simply use the term "share".

A Note on Conversion

The definition of OERs is silent on the question of conversion, and deliberately so. Conversion is not a matter of definition, but a matter of licensing. Please allow me to explain.

What makes material used for learning an OER is not the license it carries with it, but rather, whether it allows anyone to access, use, modify and share the material.

Having offered my commentary on the definition, I would like now to offer a few words on how the definition as proposed applies specifically to the issue of file formats.

Consider a statement like the following, asserted in this case by Wayne Macintosh:

If these projects used open licenses and open file formats, the digital objects would still be around for continuous improvement and reuse.

But, and this is a key point: the openness of the object is not in the object.

The openness, rather, is in what one can do with the object. If the user can do everything stipulated in the definition - access, use, modify, share - then the nature of the object becomes irrelevant. The reason why proprietary file formats are discouraged is because people using open source software cannot open them, edit them, share them. But the very same formats, if accessible via open source software, renders them open.

This has in fact happened. Formats such as PDF, SWF and DOC were at one time impenetrable, and useless to people running Linux. Today, it is the rare Linux user who is unable to access, download, read or play, modify and share resources in those formats. Yes, it requires some skill, but everything requires some skill.

Finally, the purpose of a functional definition - one based on the ability of a person to access, use, modify and share the resource - is that it enables a simple empirical test. Instead of metaphysical discussions about the nature of an object, we simply ask, "Can a person access the object, can a person use the object, etc.?", and on being shown that they can, conclude that the resource is open.

I deliberately inserted the word "freely" into the definition. Carolina Rossini, for example, writes, "The word 'freely' however has always brought tons of problems in every area of free culture in regard to its accurate concept. Below, it feels like it refers to 'gratis' ...."

It does, and necessarily so, because with enough money any person can access, use, modify and share any resource, and the meaning of 'open' collapses into meaninglessness. If a person really wants to access an Acme proprietary format (say) all the person needs to do is buy the company and all secrets will be revealed. Other companies grant access for lesser amounts of money, by way of licenses.

The purpose of the word 'freely' in the definition is intended to stipulate that the resource may be access without conditions. This, by the definition, means without payment. Not 'payment at a reasonable cost'. Not 'payment to access but freedom to redistribute'. So yes, it involves the sense of gratis as well as the sense of libre. Because you cannot put a financial cost on free as in freedom. If you have to pay a poll tax, it is not freedom. It's freedom for those who can afford it.

'Freedom of access without conditions' entails a lot, and it extends far beyond mere access to the resource. One of the most correct things Wayne Macintosh has been saying here is that supporters of OERs should be looking beyond the OER movement specifically.

In the world of print publications, 'freedom of access' meant the institution of libraries and reading rooms. 'Freedom of access' meant universal public education in support of literacy. These were, quite rightly, viewed as guarantors of freedom and democracy. In the world of electronic media, we require the equivalent; in Canada, we built a network of 'Community Access Points' in libraries in every city and town in the country, and computer education has become part of universal public education in our country.

Yes, people will want to sell copies of openly licensed materials, and to build business models around these materials. I don't have a problem with that, but we need to understand that this is sometimes a process of conversion of a resource from open to non-open. Because it is no longer open if the only way to access a resource is to pay money for it.

How can commercialization co-exist with open educational resources? If we use the functional definition, then we have an answer. If a person can still freely access, use, modify and share a resource, then commercial use has not converted an open resource into a closed resource. But if access, use, modification and sharing are impaired, by whatever mechanism, then conversion has taken place, and the resource is no longer open.

4. Recognizing and Overcoming Obstacles: What It Will Take to Realize the Potential of OER, Irvine, J., Kimmons, R., & Rogers, J.