Centre for Family Entrepreneurship
and Ownership 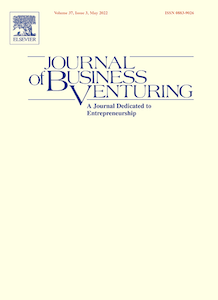 The overall aim of this special issue is to develop new scientific knowledge on the role and impact of a venture board at various stages of a venture’s life cycle from its inception to exit. We aim to advance research on venture boards and their role in private firms that is both methodologically rigorous and practically relevant.

Research interest on venture boards is gaining momentum, with more than one third of all published articles on venture boards being published within the last five years. We know from prior research that a venture board takes a crucial role in developing and maintaining an entrepreneurial firm and thus represents a unique entrepreneurial resource (Garg, 2020). In fact, the role of a venture board can even exceed traditional formalized mechanisms for the monitoring of the managers on behalf of the firm owners (Garg, 2013; Wasserman. 2017). Venture board members can add substantial value when taking an active, resource-provision role in a venture, opening their networks and providing expertise on topics such as strategy making, technology, industry or fundraising (Lang et al., 2021). Recent advancements in theory clearly highlight the difference between boards in new ventures and bigger corporations (Gan & Eriksson, 2022; Lang & Wirtz, 2021; Garg, 2020). As a result recent studies have suggested that existing theories might not be sufficient in providing explanations on how new venture boards function, and that there should be further efforts in applying multiple theoretical lenses that would shed light on the board role in new ventures ( Li et al., 2020, Garg, 2017, Knockaert et al., 2013, Bjørnali et al., 2010). The dynamic nature of the new venture boards vis-a-vis corporate boards justifies additional research efforts in exploring these board’s evolution over time (Balachandran et al., 2019), which would allow to gain further understanding of the interdependencies between the life-cycle of the board and the life-cycle of the venture.

In addition, boards can form excellent empirical settings to develop new theory about decentralized decision making and distributed cognition which form the backbone of decision making in groups (Snihur & Clarysse, 2021). Entrepreneurship has focused so far on individual entrepreneurs or founding teams to analyze decision making when it comes to recognizing and implementing opportunities. Prior cognition, prior knowledge and identities have been analyzed as main mechanisms to understand such decisions. Founding teams have been considered as units of analysis that share these identities (Fauchart & Gruber, 2011), cognitions and knowledge (Todd & Zenger, 2009). However, when new ventures have boards, these boards become part of the decision making process but the individual members of these boards do not develop the same dynamics as a typical top management team which almost acts as a single entity (e.g. shared cognition). Instead, directors in a board and the top management team members, who might not all sit in the board, form groups rather than teams of decision makers (Mohammed, 2011). How cognitive consensus making happens in such groups, how opportunities are seen, and how decisions are ultimately made are not well understood and need new theorizing into entrepreneurship. Further, in contrast to boards in established firms, venture boards start typically small and consist of inside directors (TMT members), investor-directors, and outside directors (Garg and Furr, 2017). Changes in the board are the result of negotiations between new round investors and the existing board. This dynamic nature of venture boards provides the opportunity to provide novel insights about dominant coalition formation and power dynamics in strategic decision-making groups (Bruneel et al, 2020).

The objectives of this proposed Special Issue (SI) are four-fold: (1) to understand effective compositions and relationships of Boards of Directors (BoDs) and Top Management Teams (TMTs) across all lifecycle-stages of a venture (2) to examine the impact of venture board processes and behaviors; (3) to develop and adapt theories for understanding venture boards and (4) invite papers which look at board dynamics and board behavior to develop new theories about entrepreneurial decision making under uncertainty.

We invite submissions from multiple theoretical and disciplinary perspectives. We are open to empirical studies drawing on any relevant source of data (in-depth interviews, cases, surveys, secondary data, etc.) aimed to understand issues at any or multiple levels of analysis. We seek submissions analyzing a heterogeneity of ventures in a variety of environments and with different contingencies. Comparative studies are of particular interest in order to further identify and emphasize any distinctions between new ventures and established firms. Moreover, we particularly seek to understand divergence of venture governance between different stages of the entrepreneurial life-cycle, such as very early-stage ventures compared to growth-stage ventures.

The relevant topics and research questions of interest include, but are not limited to:

Submission must fit within the paper types and criteria defined by JBV.

In particular we would like to encourage implication, recommendation and reflections for practice with respect to the creation, composition, evolution and modes of operation of venture boards. In addition, we would like to emphasize a specific need for authors to adequately contextualize data with respect to the sector, size and lifecycle stages of the ventures and venture boards represented within the data. We will start processing manuscripts as soon as they come in and, thus, we encourage authors to submit their manuscripts already before the deadline

PDW for Submitted Papers under review

Workshop facilitated by ETH Zurich for those papers that have been invited for an R&R (first round) to present the papers and develop further with the guest editors. Participating in the workshop neither guarantees acceptance of the paper in the special issue nor is participation required in order to be considered for publication.

Read the call for paper